Read more
The store will not work correctly in the case when cookies are disabled.

The people making a difference: the man who set up a mental health walking group for ‘blokes’

The people making a difference: the man who set up a mental health walking group for ‘blokes’ 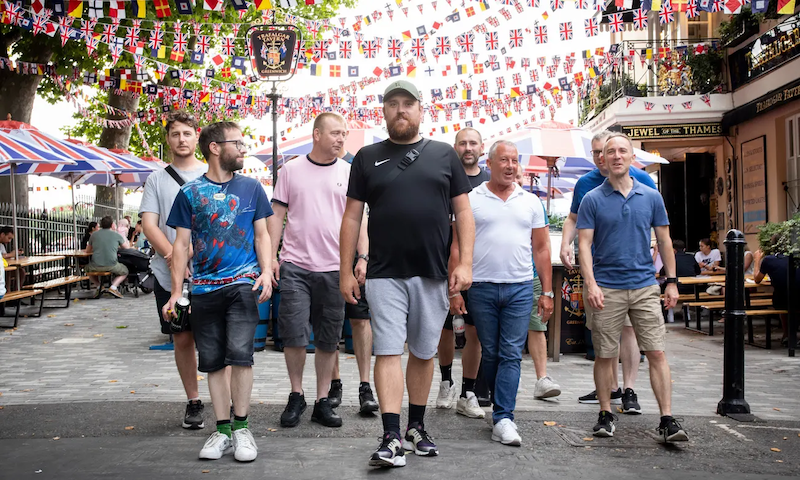 After bottling up his own anxieties for a decade, Scott Oughton-Johnson created a group for other men who’ve felt the same. Now it’s his turn to be treated

Scott Oughton-Johnson simply did not talk about his feelings. Not when he separated from the mother of his children a decade ago, and not during their subsequent custody battle.

“I was in and out of court for the best part of 10 years,” says the 35-year-old community sports coach from south London. “It was a nightmare. I bottled it all up. People would say, ‘I don’t know how you do it.’ But inside, it was terrible. The stress and anxiety were killing me.”

In 2017, it all got to be too much. Oughton-Johnson went to his GP and received cognitive behaviour therapy on the NHS. “But they can only offer a limited amount of sessions,” he says, “and then you’re back in the wild. I needed to find something to maintain that feeling I had after a counselling session. And one thing I enjoyed was walking.”

Three years later, in September 2020, Oughton-Johnson thought about trying to “set something up to reach other lads who might feel how I feel”. He created a public Facebook page and uploaded a video of himself talking about his mental health. He announced plans for a walk and asked men who’d like some companionship to join him. “I hoped it would help other people out,” he says.

Just one lad – Oughton-Johnson always calls them lads, not boys or men – turned up. “I was disheartened at first,” he says. “I thought hundreds might turn up. But we were together for eight hours that night. We had so much to chat about.” The next week, two more lads turned up. “It kept growing and growing,” he says. He thought it would be selfish to restrict the initiative to his immediate area, so he recruited “walk leaders” to arrange walks in neighbouring boroughs. The Proper Blokes Club was born.

Walks take place every day Monday to Thursday. Anywhere from five to 35 men might turn up. “As long as two lads turn up,” he says, “the walk still happens.” They try to journey through parkland or down a canal. “So that people can be in the moment,” he says, “and practise mindfulness.” The walks last between an hour and two hours. “People can peel off when they want,” he says. “They don’t have to stay until the end.”

The club is a space for men to “have a safe environment to talk about things”, he says, “without the potential judgment you might get from friends and family”. It’s much needed: the male suicide rate in the UK is more than triple the rate for women. “How many of those might have been stopped through a conversation?” says Oughton-Johnson.

“He’s helped so many people in such a short space of time,” says his nominator, Nikki Spencer, who came across the Proper Blokes Club after seeing a poster in her GP surgery. “It’s not just the men themselves: having this outlet makes a difference to their families, too.”

The youngest member of The Proper Blokes Club is 19; the oldest is 75. Inevitably, friendships are formed. “People have gone to each other’s weddings and birthdays,” says Oughton-Johnson. “Sometimes I take a step back, and think, this group of lads never knew each other a few months ago, and they’ve found lifelong friends out of it. It’s amazing.”

Oughton-Johnson’s ultimate goal is to register the Proper Blokes Club as a community interest company, and roll it out across all London boroughs, then nationally. “I get lots of messages from people saying they want one in their area,” he says, “but logistically, I can’t do that at the moment. So I encourage them to start their own groups. Some women’s groups, and groups around the country, have started walking groups off the back of it.”